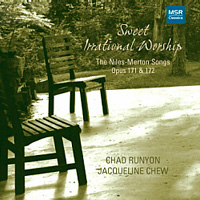 In the late summer of 1967, two eminent Kentucky residents met for the first time. Thomas Merton (1915-1968), a Trappist monk and author, traveled around the world to settle in the Abby of Gethsemani. John Jacob Niles (1892-1980), a folk singer and composer, never drifted far from his Kentucky roots. The journey to their meeting found its genesis in the language of existentialist poetry and Zen Buddhism. The two would only meet a few times before Merton’s untimely death in Thailand on December 10, 1968. But this was enough to launch Niles on a four-year journey to set twenty-two poems of Thomas Merton to music.

Both Opus 171 and 172 are unique because, as song cycles, they do not share common harmonic or melodic themes. Rather, it is Merton’s poetry that binds each cycle together. Opus 171 reflects both the poet and composer’s fascination with nature and change. Images of wheat fields making “simple music,” the moon speaking “clearly to the hill” and “secret vegetal words” permeate the first ten songs. Niles sought to capture this with music. For example, in “The Messenger” he uses a descending melody of triplets to create an image of sunlight spilling forth as the singer announces the “coming of the warrior sun.” In “Evening”a repeated three-note melody throughout the piece evokes the call of the whippoorwill.

Niles was devastated by Merton’s death. Undoubtedly his grief influenced the poems he selected for Opus 172. These remaining twelve songs center upon grief, violence and human misery. “For My Brother: Reported Missing in Action, 1943” is Thomas Merton’s most famous poem and Niles perfectly captures the overwhelming anguish Merton felt at the loss of his only brother. A falling melodic line at the beginning of the piece suggests a sense of despair. Then, as the poet entreats his brother to “Come, in my labor find a resting place” Niles changes the key from minor to major and marks the passage “with great tenderness.” A funeral march closes the piece as the pianist plays alternate fifths and octaves to create the effect of marching. In “The Ohio River – Louisville,” Niles employs a technique he learned from Charles Ives. The pianist is instructed to play a “cluster chord” only on the black notes using a felt-covered board 10 7/8” long. The clashing sound of the chord represents the noise of the city. He contrasts this clashing sound with a sparse accompaniment to reflect the “tremendous silence” of the slow-moving river that drowns out all industry and commerce.

On October 27, 1967, Merton heard Jacqueline Roberts perform “The Messenger” and “The Nativity” at Boot Hill Farm, Niles’s home. His response to the music was immediate and enthusiastic. Niles continued to work with Ms. Roberts and Janelle Pope, her pianist, over the next eight months to complete the remaining songs in Opus 171. In 1968, Merton visited Boot Hill Farm one final time. During his visit, Merton heard the first ten songs and Niles shared with him the poems he was interested in for the second set of songs. Merton encouraged Niles to make any needed adjustments to the text to fit the music. Niles worked over the next two years to complete the final twelve songs of Opus 172. Roberts continued to perform songs from both cycles, culminating in a performance of all twenty-two songs in 1975 at the University of Kentucky Newman Center. Roberts’s pianists, Pope, and later, Nancie Field were instrumental in editing the manuscripts that were published in 1981.

John Jacob Niles began composing music at a very early age. In fact, he wrote one of his most famous works “Go ’way from My Window” at the age of 16. Niles sought to capture the American spirit with his Appalachian ballads. He had a remarkable career as balladeer and singer, and at the venerable age of 75, he was seeking a new way to express himself in his music. It was around this time Victor and Carolyn Hammer introduced him to Merton’s poetry. Victor had become friends with both men and had painted their portraits. Niles discovered Merton’s poems at a time when he had suffered a tremendous loss. During his 75th birthday concert at University of Kentucky, a thief broke into his home and stole all of his unpublished works. The manuscripts were never recovered. Niles said this occurrence “marked the end of something and the beginning of a new concept of music.” Once Niles began reading Merton’s poems, he knew that he must set his words to music. John Jacob Niles was active in the performances of these songs until his death in 1980. The Niles-Merton song cycle is his last published work. Though their relationship was brief, John Jacob Niles was deeply affected by the man and poet Thomas Merton. Whenever the pieces were performed, Niles preferred the audience have the text of the poems in their program notes. He felt the audience should listen in a reflective state. In his introduction to the pieces at Agnes Scott College, in 1971, he articulated his own journey with Merton’s poetry. I do not expect you to understand the philosophy and the meaning behind these words at first glance… It took me some time. It wasn’t until it was well set to music that the meaning of the thing began to percolate in me. And it showed me something about how important it is that poetry should be set to music if you ever expect to understand it completely.

—from the liner notes by Jody Black